The C++ Standard Library provides the std::map container for collections of items that need to be looked up by a "key" identifier. This is much more flexible that an array container like std::vector that can only look items up by a contiguous set of integer indexes. While std::map (and its new C++11 relative std::unordered_map) have some admirable complexity guarantees they have much worse performance than an array. For fast technical applications we would love to have the semantics and syntax of std::map but the performance of an array. Happily, there are a number of situations where, with a little work, we can craft such a solution.

The C++ map containers are designed to provide good complexity guarantees for large containers with an arbitrary mix of insertion, lookup, and deletion operations. Achieving this asymptotic complexity comes at the cost of a large time and space overhead that is wasteful for collections that don't fall in this category.

Collections that are small or where lookups dominate insertion/deletion are common in scientific and engineering applications. An example that is prominent in ObjexxSISAME is vectors and matrices indexed by the axes for the model's degree of freedom set (ObjexxSISAME supports any meaningful 1, 2, or 3D model DOF set): these have only up to 6 keys and the key set is fixed once they are initialized. Or we may be modeling proteins where we need to look up the 20 canonical amino acids by a named key. Using a std::map for lookups on such containers is taking a massive, yes massive, performance hit.

So, how do we create this fast map-like container? Well, there are variations depending on the specifics but the basic ingredients are: 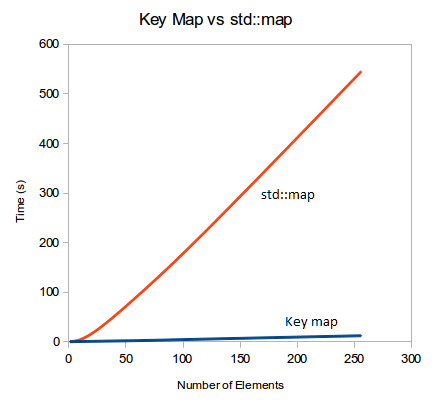 The performance impact of using a custom key map system can be dramatic, as the benchmark results shown here demonstrate.

The specific design can vary depending on such criteria as whether the key-to-index map is common to many containers and whether it is small enough that repeating it is worth the space cost to avoid the extra indirection, whether the key-to-index map is known at compile time (and thus can be a template argument, avoiding both space and indirection costs).

The takeaway from this is that use of std::map and similar containers should be limited in technical software and that there are much faster containers for many situations where maps get used. Objexx has developed a suite of fast key map containers for various scenarios that we have used with great results in our in-house and client applications.