Qt provides a rich GUI framework with excellent support for tables but when your need a feature that isn't directly supported things can get complicated quickly. One such feature for tables is a so-called "frozen" column or row that should remain fixed like the headers when scrolling. Qt table widget and view classes do not support frozen columns or rows and implementing them can be both tricky to get right and an efficiency problem. 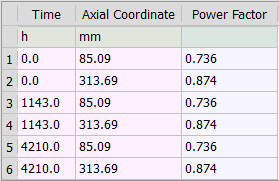 Frozen rows and columns are useful when you they contain label-like content that doesn't belong in the header for some reason, such as it is editable. In our case, we use a frozen row in numerical tables for the dimensional units of the columns as in the example shown here. As you scroll the table it is useful to keep the units in view and sometimes the units can be changed via drop-down combo boxes to convert the values.

Qt's Frozen Column Example presents the basics of an approach but we found it lacking in a few ways:

With careful attention to these details a defect-free and efficient Qt frozen column or row table can be implemented.